Been seeing these food delivery subscription sites all over the web and heard about them through friends and family. Decided to try Hello Fresh, as you get 50% off your first week. If you choose to continue, you’d get 3-4 meals picked by you, delivered weekly. For this promo we got the above Turkey Tortilla Pie, Honey and Herb-Crusted Pork with Roasted Broccoli and Potatoes as well as a French Dip Sandwich with Oven Fries.

It says that all these meals take 35mins to prepare and so far the tortilla pie was made in that time frame. But if you have kids constantly taking attention away, I can see how it could take a lot longer. My husband helped with the meal and keeping our son entertained, which made it a lot easier and quicker. The tortilla pie tasted fine, though there were no veggies. Making this on my own, I would definitely bulk this up with veggies. Being that we chose the 4 serving option, not quite sure why it called for a 9×13 baking dish. We got 6 servings out of it instead, though you could easily go to 8 smaller servings.

In the end, would I spend the weekly regular price (3 meals for $139.99/4 servings a week) they ask for the subscription? Probably not. Though I do appreciate that they pick out low or no sodium products as well as organic. But I could just plan these meals out myself and get the ingredients. For a once in a while option it’s all right though and I’ve skipped the next 2 months worth of meals for now.

I had put a roasted turkey breast from our Thanksgiving dinner in the freezer. I wanted to use it up, so looked for an instant pot recipe to make. When I came across this one, I decided to make it since it was simple to put together, and pretty quick to cook in the instant pot. The end result turned out good, though I used cream instead of coconut milk and I used regular flour. I would say it definitely needs a lot more spice and herbs for our tastes, so when I make this next it’ll have more. To me it’s a good recipe, that just needs a little more oomph to it.

Few weeks ago we Canucks celebrated Thanksgiving. And of course, after spending a wonderful day filled with great company and food, there’s the leftovers. So. many. leftovers. The majority of it being the turkey meat itself. So, I went to Google, to find a Crock Pot recipe I could use it up with. I came across the recipe below and thought I’d give it a try, as I had never made a chowder before. It was easy to put together, which is always important to me!! The sweetness of the corn and the spiciness of the red pepper flakes were a great combination, which myself, hubby and our son enjoyed. We’ll definitely make this again sometime. For those of you in the U.S., about to celebrate Thanksgiving day a few weeks from now – give this recipe a try to use up that leftover turkey you’ll have. I think you’ll enjoy too!! 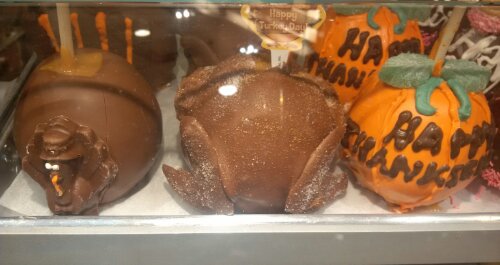 They’re back!! The Rocky Mountain Chocolate Factory, have them out now, for your enjoyment…gobble!! gobble!!

When I got up this morning, I was craving Turkish tost for breakfast. Traditionally it’s made with ‘Kasar’ cheese, which is perfect for melting, and gets all ooey gooey when toasted. Unfortunately, we can’t get Kasar cheese here, so the closest thing to it in North America – is Mozzarella. I had a, shredded cheese mixture of cheddar and mozzarella, so I used that this morning. I also added ‘Sucuk’, which is Turkish Sausage. This is another variation in the sandwich, and our very favourite. I sprinkled a little of the cheese on the bread (I used light rye), placed a few slices of sausage, and then another sprinkling of cheese on top. I then placed it on our griddler, set to high, and toasted it for 8-10mins. And voila, you have yourself a Turkish grilled cheese!! One of Turkey’s most popular, and beloved comfort foods…

Two weekends ago, we celebrated Thanksgiving here in Canada. A wonderful dinner was had by all, and a TON of turkey and fixin’s were left over. We decided to save, one of the breasts and a leg, to make something else. After perusing the interweebs, I came across this turkey pot pie recipe, that had a cornbread crust. I usually make pot pie with a flaky crust, but wanted to try cornbread, since I had a bag of Bob’s Red Mill Cornbread Mix. Next time I’ll make the cornbread from scratch, as is shown on the recipe itself though. I chose to use frozen veggies, consisting of carrots/corn/peas/green beans. I had leftover celery, and added mushrooms, because we love mushrooms. I chose to also use poultry seasoning instead of sage and thyme separately. It turned out pretty good too!! The only thing I’ll change for next time though, is I won’t pour the cornbread batter over the pot pie mixture, since it sopped up a lot of the liquid in the baking process. Next time, I’ll scoop the cornbread batter, on top of the mixture instead. I’d recommend this recipe, as a good basic one to make your own though!! The recipe below has been doubled, so if you want to make less, just adjust the measurements accordingly.

To make filling: Preheat the oven to 400°F. Coat a pie plate (or any baking dish you like) generously with nonstick cooking spray. Heat olive oil in a large pan over medium heat. Add onion, carrots, celery, and green beans, and sauté for about 10 minutes, until tender. Add garlic and stir constantly for 30 seconds. Sprinkle the flour into the pan and stir until it coats the vegetables, about 30 seconds. Slowly stir in 2 cups of heated chicken or turkey stock, whisking well so that the flour begins to declump and thicken the stock. Cook mixture over medium heat until thickened and bubbly, about 4 minutes. Stir in turkey, thyme, sage,  salt, and pepper. Pour the mixture into your prepared pie plate and spread mixture evenly.

To make crust: In a large bowl, whisk the cornmeal, flour, baking powder, sugar and salt. Stir milk, egg and canola oil until well combined in a separate bowl. Stir wet ingredients into dry ingredients. Spoon the batter evenly over the filling. Bake until the top is golden brown, about 22 to 25 minutes. Let cool for at least 15 minutes before serving.

Sorry about not posting for a couple of weeks, but I’m away in beautiful Turkey, for the holidays!! My hubby and I are in foodie heaven here, and I’ll post some of what we’ve eaten when I get back. I just wanted to drop a quick post before then though 🙂

I hope everyone had a Merry Christmas last week, and has a very Happy New Year!! Wishing each and every one of you, a wonderful 2013, filled with all the blessings that new beginnings bring…

So, I still had a whole turkey breast left from Thanksgiving, that I didn’t know what to do with. Last year I had made soup, but this year I wanted to make something different. Then I came across this recipe from Chatelaine Magazine (A Canadian women’s mag, if you don’t already know), called Turkey Vegetable Biryani. I took a look at the recipe, and I had everything in the recipe already – BONUS. It turned out pretty good, with a nice flavour. If you’re looking for super authentic biryani flavour though, you’re out of luck, but otherwise it’s pretty decent tasting.

So, this past long weekend, was Canada’s Thanksgiving…the kick off of the holidays – as far as I’m concerned!! We had a wonderful dinner on Saturday with turkey and all the trimmings!! We got to spend the evening with my parents, filled with great food and great conversation. Hopefully all of you Canucks out there, had just as wonderful a Thanksgiving as we did!!

So, I was thinking, I haven’t had a pizza bagel in AGES. Remember those? Now, I’m not talking about the store bought frozen kind. I’m talking about the homemade kind. Whether you made it as a teen, or your Mom or someone else made it for you, it brought back a bit of nostalgia for me 🙂

I took an Everything bagel (any bagel of your choosing), spicy pizza sauce, real turkey breast (any meat or veggies or both of your choosing) and Kraft 4-Cheese Italiano blend (or any melty cheese of your choosing). Now, the best way to make this, is in the oven – hands down. But, if you don’t want to bother with the oven, I’d suggest toasting the bagel first before putting it into the microwave for melting. Of course you’ll get a crisper result in the oven, but if you don’t have the time, the microwave melts just as well minus the crisp bagel. Either way, it’ll be ooey gooey delicious!!